“Their exact words were ‘her brain isn’t compatible with the outside world. You are the only thing keeping her alive’’’.

It was meant to be one of the happiest times in my life.

I was 33 weeks pregnant with my first child. I’d been doing all of the things expectant mums do like speculating who our baby would look like, stocking up on teeny tiny onesies and avoiding soft cheese and wine. My husband Cory and I were so excited about becoming parents.

Then one night I woke and felt like something was terribly wrong. There was no physical reason for this. It was purely intuition. I was not in pain, there was no change in my baby’s movements, but I just couldn’t shake the feeling.

The gut-feeling you get as a mum

I visited my local GP the next day to request an ultrasound. We lived in country New South Wales and the closest ultrasound was more than 90-minutes away, but I was adamant about getting that scan. I had to know if our precious baby was okay.

The scan detected an issue with her brain. We were told we needed to get to Sydney as soon as possible for more tests. Sydney was five hours drive from home at the time.

I was numb. Cory and I held onto each other so tightly and could barely believe what we were being told.

This was not part of our plans. My whole world came crashing down.

Our unborn baby suffered a stroke

Once in the hands of specialists in Sydney, we were given news that floored and confused us. Our unborn baby had suffered a stroke. This just didn’t seem possible. Wasn’t a stroke something that only affected older people?

We were told there was a possibility our baby would not live. Our baby was given less than 10 percent chance of survival and we were being primed for the worst-case scenario. But there was still a tiny glimmer of hope and we desperately clung to that. We vowed to give our little one the best opportunities possible if they would just hang on.

Our baby did hang on. On the 19th May 2011 just before midnight, I held our beautiful little girl Keeley in my arms. It was a magical moment filled with so much joy (and buckets of happy tears!). Keeley came into the world crying and screaming.

It was music to our ears. She was alive! The news about Keeley was devastating for the family. Image: Supplied

A little life of many unknowns

We had no idea what the future held for Keeley. There were so many unknowns.

Keeley’s doctors did not think she would be able to walk, talk or see. But nobody took in to account Keeley’s tenacious, fighting spirit.

Keeley had made it through the birth and was ready for what was next. Keeley spent weeks in the neonatal intensive care unit and had brain surgery at just eight weeks old.

From a very early age, Keeley had hours and hours of therapy each week to give her the very best chance of being co-independent. Everything is a learnt process for her.

Keeley never crawled. She learnt to walk in a walking frame and by holding our hands. Then at four years old she took her first steps by herself and has never looked back.

While Keeley has a range of vision problems and other challenges including epilepsy and cerebral palsy, she is incredibly happy and has that amazing quality of brightening any room with her presence.

Keeley is our beautiful rainbow after a terrible storm. No step is ever taken for granted and no word spoken ever falls on deaf ears.

Adding to the family

The decision to expand our family with a brother or sister for Keeley was not taken lightly. While we longed for a second child, there was a lot to consider.

I had genetic testing to determine if there was a risk of stroke for any future siblings. Everything came back clear. Things were looking up and I became pregnant again.

My second pregnancy went smoothly. I took every precaution possible and even finished work at 19-weeks to ensure I was well-rested and looking after myself.

Our darling daughter Delaney entered our world in October 2015 without complication. She was healthy and happy and so very loved.

When Delaney was eight weeks old, just before Christmas, Cory and I noticed a change. Her right hand was in a tight little fist and she was using her left hand to grab at toys. We knew these were signs of stroke and an all too familiar sense of fear took hold.

In Australia, up to 500 babies and children have strokes each year, but surely lightning could not strike our family twice.

It took a few weeks for a diagnosis. It was a heart-wrenching time. When the official word came through, Delaney too had suffered a stroke, I felt cheated, angry and sad. It did not seem fair

But there was no time to dwell on those feelings, we had to put Delaney’s best interests first and got stuck into therapy to strengthen her little body. Delaney’s stroke was mild compared to Keeley’s.

It affected a small part of the left side of her brain. As a result, she has weakness on her right side of her body. But she, like Keeley was wild and determined. With hard work, Delaney has reached milestones at the same age as her peers. Delaney demonstrates the importance of diagnosis and early intervention.

Delaney is now four and Keeley is eight. Keeley has beaten the odds in so many ways. Not only can she walk and talk, but she is also in a mainstream school with incredible teachers, an amazing teacher’s aid and community behind her. She can even write her own name now. Keeley takes part in triathlons and does Little Athletics and has friends that happily tweak the rules of a playground game so she can join in.

Delaney also loves her sport. Little Athletics, Kinder Gym and Little Kickers. She tries her hardest at everything. I love hearing her say “I can do this by myself now, I don’t need your help”.

We often reflect on just how far our wonderful girls have come and how much they light up our lives. I am so proud of them and are so thankful they are alive and thriving. Being able to hear them say I love you is the most precious gift of all. 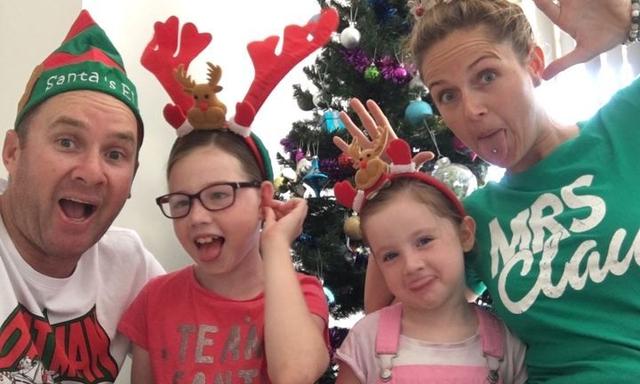 So grateful to be all together. Image: Supplied

Does vitamin D ward off coronavirus? Don’t reach for the supplements yet

Doctor infected with COVID-19 dies of heart attack in Uzbekistan

Controlling your risk of heart disease

What 23-Year-Old Thought Was a Heart Attack, Was...

Imaging highlights connection between heart and kidneys in...